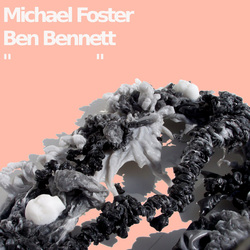 
Ben and Michael began playing together with drummer David Grollman in the trio BDM, which toured the US in the summer of 2014, delivering outlandish improvised performances that toed the line between music and performance art. Their duo project resulted from finding a strong musical affinity, and a shared desire to push the sonic boundaries of the drums/sax duo over the edge. The two have extended their instruments’ vocabulary to the point of overlapping with each other (Michael turning the saxophone into a percussion instrument, and Ben blowing on membranes like reeds). A wide-ranging sonic palette, extreme shifts in dynamics and mood, and a commitment to presence and vulnerability come together in the duo’s unpredictable interactions to create music that is unique to each performance.

Ben Bennett is an improvising percussionist who plays drums, membranes, and self-made instruments, which are combined with each other in various mutable arrangements, and played by striking, friction, breath, and other techniques. Although his instrument and music could both be described as unorthodox, they retain the essence of the modern drumset, and are a distillation of diverse musical traditions. He has toured North America and Europe, playing with different groups, ad-hoc collaborations, and solo.

"Foster and Bennett’s efforts, as they appear across In It, represent a fascinating return – a music which, enabled by historical distance, hints at free improvisation’s roots in the blues. A hybrid music which draws on a blending of many pasts, to present a vision for possible futures. Theirs is a music of deep emotion, interplay, and call and resonance – formed by brilliant technique and a carefully honed ear. As great improvisation always is, these are sounds defined their silences as much as the note and beat, where listening has a greater role than what is played."
-Bradford Bailey, The Hum

"The crux of Bennett’s output is formed through his anomalous showmanship and in the resourceful nature of the instruments he tailors. If there is “value” to be found in his art, then these aspects surely make for a sensible starting point. Recycled objects and household items are transformed into contraptions assembled for a purpose unknown to the performer until the very moment he drags them before baffled onlookers, inserting them into an orifice or smashing them with an unrelated implement. Such instances of universal obscurity add to the queer web of noise that makes the resulting sound so riveting from the perspective of the audience." ­-Tiny Mixtapes